President Michel Aoun and first Lebanese Lady Nadia el-Chami Aoun opened the doors of Baabda Palace for a delegation of students from five schools (different Lebanese regions), as well as different orphan institutions with the presence of the president’s daughter, Claudine Aoun Roukoz.
The children literally invaded the palace and took the place of all ministers with the blessing of the president who later on spoke to them in a paternal way and said, “My political struggle in favor of Lebanon’s independence was for your sake and the sake of my daughters and grandsons.

Enjoy the images and video of a unique event, an event that never took place at the presidential palace before. A palace that became during the Easter holidays, the “Children’s Place,” exactly the way it was in the late 80’s, when we use to call it the “Palace of the People”.
A place that the new Lebanese generation will never forget. 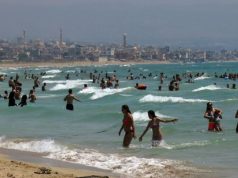 (OTV REPORT) CNN: Tyre the Queen of the Seas !